Unexpected power outages in a part or over the whole electrical network are one of the main challenges that face modern times. Power failure in some regions has become more frequent in the last decades due to many factors such as but not limited to climate change and global warming, natural disasters, extreme weather conditions, wars, cyber-attacks on the network, and high-power demand. These factors and many others can occur at any moment, with and without prior notice. Therefore, they lead to electricity shortages in a small or large population for a short or a long period.

As an example, in Texas in February 2021, 5 million customers were left without electricity in a freezing winter due to a blackout on the network. This led to more than 700 deaths. Moreover, blackouts can lead to monumental financial losses and high maintenance costs, which can reach billions of dollars in just a short period. In these unexpected blackouts, the electrical network might not recover quickly. Therefore, energy backups are necessary to supply the electricity demand of the customers, such as using generators, photovoltaic systems, and battery storage systems. However, not all householders have the ability to buy such systems due to many factors. As a result, their lives can be threatened by an unexpected blackout events. Because of this, it is important to develop emergency electric vehicle power plants which can reach far regions where the blackout occurs to supply them with electricity for a few hours or days until the network is recovered.

In a world with plenty of natural and human-made disasters, electrical power systems become less reliable especially in some regions where power failure is a common event. From this place, the future of civilization should focus more on independence and autonomy, especially in the energy sector. The shift from centralized to decentralized and distributed strategies becomes more convincing, especially in the presence of advanced technologies such as distributed generations (including battery storage and renewable energy systems) and micro-grids. Any power failure on the generation and transmission sides might increase the risk of blackouts on the whole network or in some regions. There are some critical periods during the year in which any power failure might threaten the lives of thousands of people, particularly in winter in the northern hemisphere. Hence, deploying distributed generations and forming micro-grids could be one of the best solutions to increase the local power generation and reduce the dependency on the main electrical transmission and distribution networks.

Despite the advantages of these technologies, renewable energy sources are not reliable because of their intermittent nature. This is especially true during natural disasters and wars. In addition, the deployment of distributed generations (such as installing photovoltaics, battery storage systems, and backup diesel generators) is limited due to their high investment cost. Moreover, in some cases, the blackout might occur on both the distribution network and the distributed generations, which puts the customers in danger, particularly in critical weather conditions.

To solve the problem, in this work, we develop an Emergency Electric Vehicle Power Plant (EEVPP or simply EEV) in which the electric vehicle is designed to supply electricity to a large number of consumers during power outages and emergency cases. In addition, we propose an algorithm that is capable of determining how many EEVs are needed to supply a certain region until the recovery of the electrical network considering many factors.

In this work, we define an Emergency Electric Vehicle Power Plant (EEV) as a fully battery electric vehicle that supplies its own energy demand by using its internal battery system. In addition, the size of the battery is huge that allows it to travel very long distances and supply many customers with electricity for many days in emergencies until the recovery of the network. The EEV has a huge cabinet, as in Figure 1, that contains hundreds of batteries, such as Lithium-Ion distributed in an optimal way to maximize the cabinet energy capacity. The maximum number of batteries in the cabinet (NC^B) is calculated using Eq. (1) below. Where, BL, BW, and BH represent the length, width and height of a single battery including the spacing for connectivity and cabling, respectively. CL, CW, and CH are the length, width and height of the cabinet in which the batteries will be distributed. ⌊∙⌋ is the floor function, e.g., ⌊4.2⌋=4. The total energy capacity of the cabinet (EC) is calculated in Eq. (2) below. BC is the energy capacity of a single battery, and NC^B is the maximum number of batteries in the cabinet.

Figure 1. Cabinet of the EEV.

In this subsection, we propose an algorithm that calculates the needed number of EEVs that supply a region with electricity for a certain period until the recovery of the network. Figure 2 presents the flowchart of the proposed algorithm which is divided into two parts. The first part calculates the energy capacity of a single EEV. The second part calculates the needed EEVs that should be sent to the isolated region where the power failure occurs. Before sending EEVs, it is important to estimate the average energy demand per day (E_reg^Avg) of the isolated region and estimate the needed number of days for power recovery (A). Symbol T represents the period of study in hours (e.g., 24 hours). It is also important to consider the traveling distance (Dkm) and the internal energy consumption of the EEV per km (Ekm^EEV) in order to assure that the number of EEVs (N2^EEV) is sufficient to supply the demand without any problems. 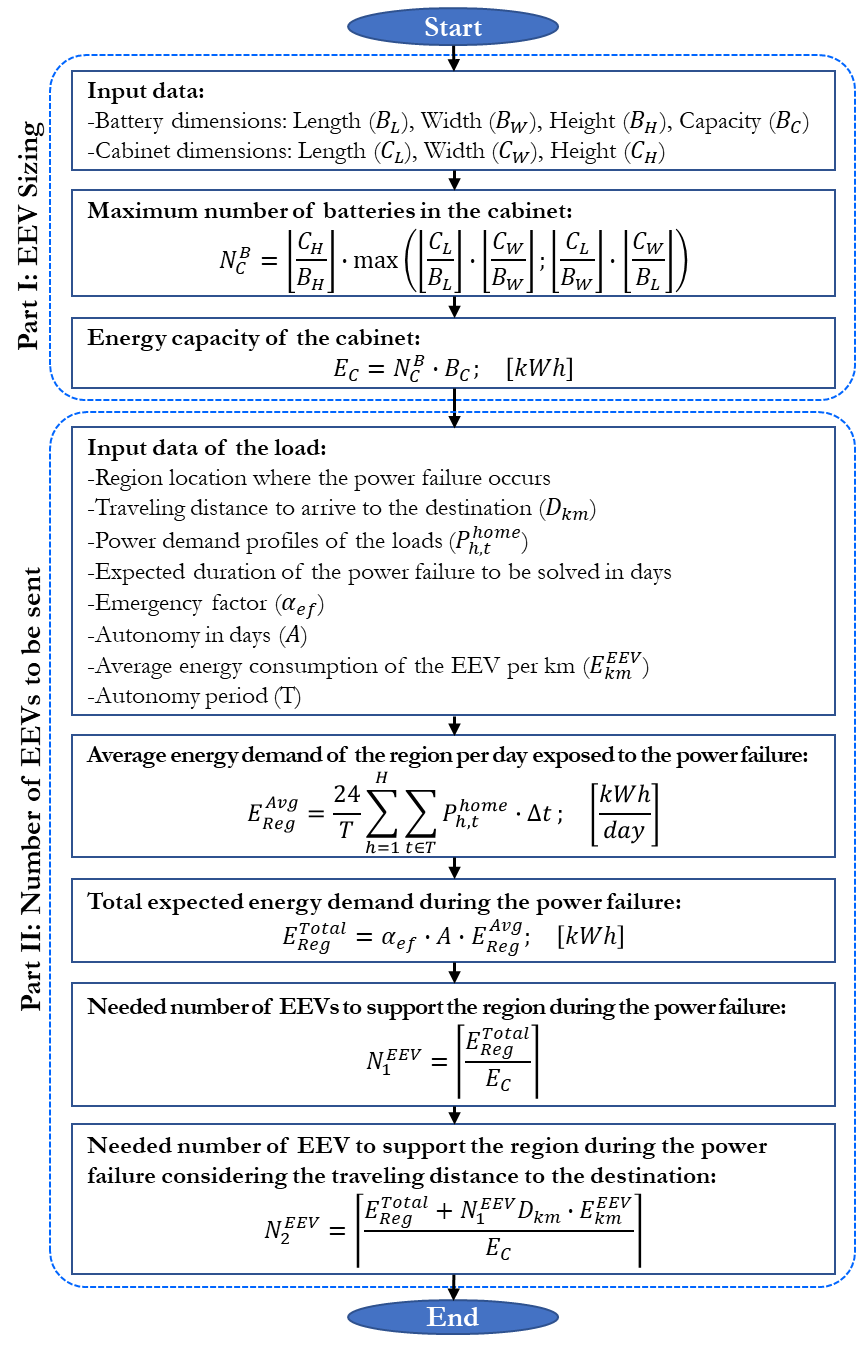 Figure 2. Proposed algorithm for calculating the needed number of EEVs to support a region under power failure.

This work tries to solve the problem of blackouts and power failures by developing Emergency Electric Vehicle Power Plants (EEVs), which would supply impacted regions with the necessary amount of energy for several days until the network recovers. The amount of the needed energy is calculated based the average power demand profile of the region. The EEV behaves as a power plant, therefore, it is treated as a power plant in which the power generation should supply the whole demand for a specific period of time using battery management systems. In addition, an algorithm is proposed in which it determined the minimum required number of EEVs that should be sent to the impacted region to avoid any energy shortage during the blackout period. Further studies should be done in order to validate the feasibility of such project and calculate its techno-economic impact on the consumers and the power system operator.

This article was edited by Greeshma Vishwanath

To view all articles in this issue, please go to May 2022 eNewsletter. For a downloadable copy, please visit the IEEE Smart Cities Resource Center.

Claude Ziad El-Bayeh received a Master degree in electrical and electronic engineering from the Lebanese University Faculty of Engineering II, Lebanon, in 2008; a M.Sc. degree in Organizational Management from the University of Quebec in Chicoutimi, Canada, in 2012; a Master of Research degree in Renewable Energy from Saint Joseph University, Beirut, Lebanon, in 2014; and a Ph.D. degree in Electrical Engineering and Renewable Energy from the University of Quebec - École de Technologie Supérieure, Montreal, Canada, in 2019. From 2008 to 2014, he worked as a professional engineer in the field of electrical installation in buildings. His fields of expertise include Energy Management, Operations Research, Self-Sufficient Smart.

Mohamed Zellagui (IEEE Senior Member) was born in Constantine, Algeria in 1984. He received his engineering degree (Honors with first-class) and M.Sc. degree in Electrical Power Engineering from the University of Constantine 1, Algeria in 2007 and 2010, respectively. He received Doctor Degree in Power Systems from the University of Batna 2, Algeria in 2014. From 2008 to 2013, he worked as a professional engineer in the field of power system protection and relaying in the Algerian Company of Electricity Distribution. He is currently an Associate Professor at the Faculty of Technology, University of Batna 2, Algeria. He was visiting research with various universities in France, Malaysia, Italy, and Canada. He collaborates with many universities and laboratories. Has authored or co-authored more than 50 refereed journal and conference papers, three book chapters, and three edited books. He is a senior member of Institute of Electrical and Electronics Engineers (IEEE), and member of Conseil International des Grands Réseaux Electriques (CIGRE). Editor board member and a reviewer of many international journals and conferences. His research interests include power systems protection, renewable energy integration, energy efficiency, optimization algorithm, distribution systems, and smart grids.

Khaled Alzaareer received the B.Sc. and M.Sc. degrees in electrical power engineering from Yarmouk University, Irbid, Jordan, in 2010 and 2012, respectively, and the Ph.D. degree in electrical power and energy engineering from Quebec University (ETS), Montreal, QC, Canada, in 2021. He is currently an Assistant Professor with the Department of Electrical Engineering, Philadelphia University, Jordan. His research interests include power system operation, voltage stability and control, sensitivity analysis, integration of renewable energy resources, and smart grid.

Flah Aymen was born in Gabès, Tunisia in 1983. He received the Bachelor degree in electrical engineering from the ENIG, Tunisia, in 2007 and the M.Tech. degree from the same school in 2009. His PhD is with the Department of Electrical Engineering in 2012. He has academic experience of 11 years. He has published over 40 research articles in reputed journals, international conferences, and book chapters.