Ubiquitous Internet of Things in Electricity (IoTE) is emerging as a key technology for energy intelligent management in the construction of a smart city framework. It provides strong support for distributed consumption of new energy, multi-level energy interaction, and intelligent consumption of multi-energy for various entities within a smart city. The cloud-edge collaboration model, which is characterized by a weak centralized distribution, further integrates modern intelligent algorithms such as artificial intelligence (AI) and data mining to optimize the overall architecture through the reasonable allocation of cloud and edge task plans in the IoTE. The cloud-edge two-layer fusion model theory provides feasible research schemes in theoretical research and guides the future direction of IoTE construction in smart city development.

Smart cities are aimed at efficiently integrating advanced information technologies across different application areas to realize intelligent management and automated operation as well as ease of maintenance. The construction of an urban intelligent system involves many technical aspects, among which the Internet of Things (IoT) solutions that consist of small and microsensors, intelligent terminals, and other devices, is its important basis [1]. As the development of new energy technology becomes more mature, the phenomenon of distributed access of clean energy such as photovoltaic and wind power in low-voltage distribution system tends to be common, and the traditional low-voltage distribution system cannot support the safe and stable operation of the new type low-voltage distribution system with complex and variable tides in the background of a large number of new energy devices access. Therefore, the intelligent transformation of low-voltage distribution system around new energy is the cornerstone of modern city energy intellectulization with electric energy as the core, and the core task of building the Ubiquitous Internet of Things in Electricity (IoTE). The IoTE not only can include a sensing layer, a network layer, a platform layer and an application layer structure required by energy services in smart cities but also can provide technical support for administrative decision-making, energy interaction, traffic management and other fields.

The main components of IoTE include a sensing layer, a network layer, an edge computing layer and a cloud computing center as shown in Figure 1.  For IoTE, the perception layer can not only assess the operational risk of the whole system in real time, but also provide timely warning and prevention sense in case of sudden system failure, in other words, the sensing layer carries out the role of "nerve endings" for comprehensive perception of system status. Due to its rapid development, the total number of measurement terminals in the sensing layer has increased exponentially, and the inconsistency of communication methods used between different devices makes the network layer topology exceptionally complex, making it difficult to guarantee data synchronization and timeliness. The edge terminal usually completes data statistics every 15 minutes and sends data packets to the application layer every 8 hours. The cloud computing center processes the data packets through situation awareness, active operation optimization etc. Then, it sends scheduling instructions to edge terminals, which drive controllable devices to respond to the instruction.  Due to the long physical distance between the edge layer and the cloud center, and the fact that most of the computing tasks are carried out at the cloud center, resulting in high computational pressure and high storage space requirements for the latter, and the inability to make timely responses to some tasks with high demand on real-time actions, the edge layer has a certain amount of computing power but is not fully utilized for simple local optimization tasks[2].

At present, many studies have been carried out on the control and operation strategy of the IoTE for electricity distribution, which are mainly divided into:

(1) Centralized distribution: a single control center monitors all equipment components in the whole network and calculates scheduling control instructions. Because the centralized system has high requirements on computing performance, monitoring data collection and communication, it is difficult to take advantage of global optimization in real large systems.

(2) Decentralized distribution: each control area in the grid satisfies its power balance and secures stability by controlling internal resources and achieves the goal of global economic and safe operation through mutual coordination. In actual operation, the main station participates in a few tasks, which is not conducive to the monitoring of distribution network working conditions.

(3) Weak central distribution: there is a central node to coordinate each control area, and each control area controls internal resources. Various control objectives such as global optimization and game balance can be achieved by designing different coordination mechanisms[3].

This method is further developed into a cloud-side collaboration model, which can give full play to the advantages of strong computing power in the cloud center and high real-time performance in the edge layer through flexible task deployment mechanism in the actual operation, and requires little upgrading of existing intelligent devices. 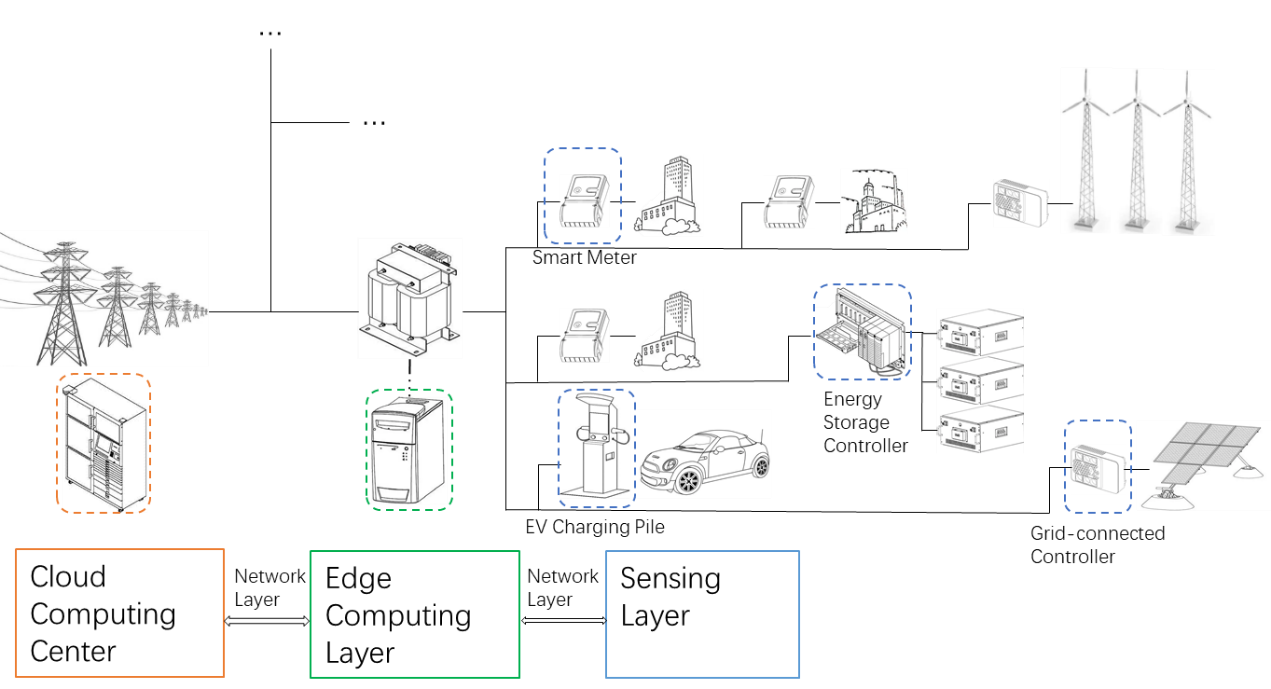 In the cloud-edge collaboration model illustrated in Figure 1, the cloud functions as the computing center of IoTE, its operational model sets lower priority on the interest claim of the edge layer and instead carries out the global optimization, which of the nature of slow time scale operation. As the regional control center, the model of the edge terminal should include the function of regional adaptive division and the decision-making function aiming at maximizing its interests, which usually adopts the cluster theory for regional division and combines with the multi-intelligent body system theory to complete the regional optimization decision [4,5]. Using the above framework to model the fusion control of cloud and edge devices, the Stackelberg-Nash game model with a two-layer structure is used as an example: the cloud makes a policy according to the objective function constrained by the stable operating conditions of the system, while the edge terminals make their own decisions according to their objective function and constraints, which is expressed as the two-layer optimization structure in Figure 2. 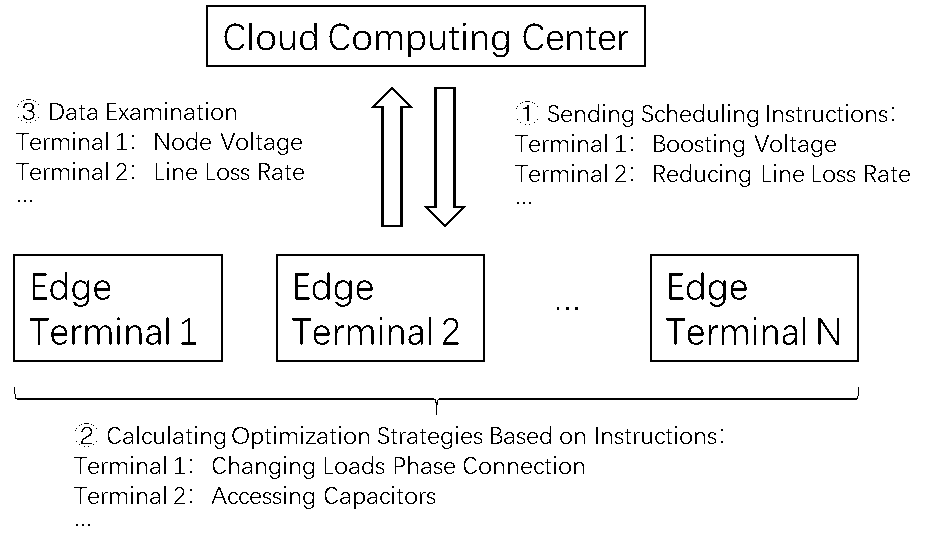 On the other hand, the deep integration of cloud, edge computing, multi-intelligence system and other modern optimal control algorithms in the low-voltage system has transformed the low-voltage distribution system from traditionally neglected nerve endings to an important part of the new power system and smart city construction[3]. Some examples of this would be:

This article was edited by Xiong (Bill) Yu

To view all articles in this issue, please go to March 2022 eNewsletter. For a downloadable copy, please visit the IEEE Smart Cities Resource Center.

Yongjun Zhang received a Ph.D. in Power System and its Automation from the South China University of Technology, Guangzhou, China, in 2004. Currently, he is a full professor at the School of Electric Power Engineering. His research interests include power system reactive power optimization, smart energy, and HVDC transmission.

Kanghua Zhong is a Ph.D. Student studying electrical engineering at the South China University of Technology, Guangzhou, China. His research interests include Internet of Things in Electricity and Topology optimization.

Yuzheng An is a master's student studying electrical engineering at the South China University of Technology. His research interests include low-voltage big data and the application of artificial intelligence in low-voltage distribution system.