This article answers the technical question for how E-CARGO can support the standard development of Smart Cities in making logistics smarter. This article provides an answer to this question by clarifying several important concepts.

A smart city is an urban zone that uses technology to collect specific data, which is used to manage assets, resources and services effectively and efficiently, and improve operations of the city. Smart cities require that their governments apply technologies to monitor, analyze, plan, and govern the city. The governments need to collect data from citizens, devices, buildings, and assets. Such data is then mined, analyzed, and processed to monitor and manage the traffic and transportation systems, power plants, utilities, water supply networks, waste, crime detection, information systems, schools, libraries, hospitals, and other community services. A smart city is built on fundamental infrastructures including social, physical, institutional and economic infrastructures.

Is a smart city a collaboration system? Yes, because it includes many people working together to make the city run properly. How could we make a city smart? The fundamental methodology is data collection, mining patterns, extracting intelligence through technologies of sensing, learning, communication, and control. To run a smart city, we need to provide quick responses to every significant event occurred in the city. Fast and optimized decision making is required.

E-CARGO comes from Environments – Classes, Agents, Roles, Groups, and Objects. It is an abstract model that provides a framework for Role-Based Collaboration (RBC), which is a computational methodology for complex systems. E-CARGO can help analyze, design, and simulate complex systems by formalizing problems and obtaining computational solutions. A smart city standard should clarify the architecture of a smart city including the top-level (first-class) components and their relationships (second-class). E-CARGO is a right model for this purpose.

RBC and E-CARGO [1, 2] are established based on the previous methodologies such as object-orientation, agent-orientation, distributed systems, software engineering, systems engineering, optimization, aesthetics, Chinese culture, and philosophy. RBC is proposed to make collaboration easy and efficient by well-prepared role negotiation, agent evaluation, and role assignment [1, 2]. RBC also involves the role-playing process by an adaptive or dynamic way (Fig. 1) [1, 2]. To understand Fig. 1 from a smart city’s perspective, one can stand out of the process and see what happens in a city including a variety of roles and numerous agents who are working on (I intentionally use “on” to mean an environment is a platform for agents to play roles) different environments to communicate with each other and access classes of objects. A smart city is dynamic and fits the process of RBC (Fig. 1). 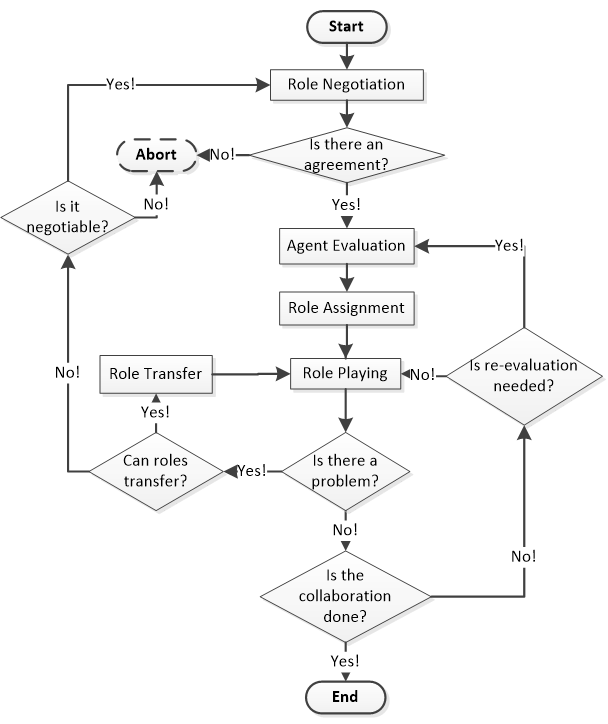 For example, a smart city introduces new technologies to an existing city. The first step is to negotiate what and how many new roles, which are functional requirements, and how many agents for each requirement, are introduced and specified. This negotiation is based on the mission, budget, and acceptability of the citizens of the city. The second step is to evaluate which new technologies (agents including providers) can meet the requirements (roles), and then an optimized decision making (assignment) is obtained to offer contracts to technologies including providers. The third step is to let the providers establish the technologies. If there are problems in the constructions, iterative processes are required (Fig. 1).

Using E-CARGO, a system Σ is defined to be a 9-tuple: <C, O, A, M, R, E, G, H , s0> [1, 2],  each of which expresses a finite set of classes, objects, agents, messages, roles, environments, groups, human users, and the system’s initial state, respectively. We use c, o, a, ♪, r, e, g, and h to express an element of each corresponding set, respectively. Note that, “♪” is used intentionally and especially for avoiding using the overloaded letter, m.

The first-class components in E-CARGO are classes, objects, groups, agents, environments, and roles. All these components are fundamental structures depicting the phenomena of our natural and social world. Especially the first-class components represent the constructions or compositions of a complex system. Classes of objects represent a linear analysis of the world, i.e., everything in the world is an object. Groups of agents provide the second dimension for understanding the human world. Roles and environments present the 3rd dimension in understanding the world, including task (role) assignments and task execution (role playing). With the help of E-CARGO, it is clarified that a team, which is a well-organized group, can be formed by a group of agents assigned to different roles in an environment including roles and objects. To understand E-CARGO with Fig. 2, one may view each axis as a set of discrete elements, and a segment on the axis is a re-organized subset of the whole set of the designated components, i.e., objects, agents, and roles in consideration. The IEEE standards for smart cities should clarify the corresponding components of E-CARGO to help develop corresponding technologies.

The first thing is to negotiate roles. For example, the top-level components of a smart city include social, physical, institutional and economic infrastructures. We can specify these four infrastructures as top-level roles and then divide them into subroles and inform how many providers including government departments, enterprises, and citizens are needed. A social infrastructure role can be divided into health, education, housing, police, and courts, as well as arts, culture and recreational services. They can be divided into other levels of subroles further. 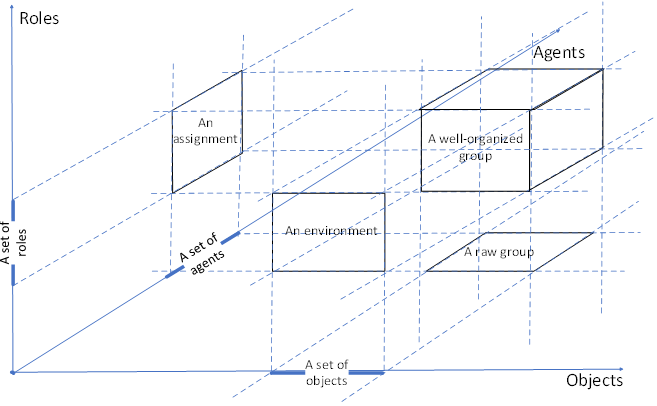 Fig. 2 shows that we can understand a society or a collaboration with E-CARGO in a 3-dimesional (3-D) way. According to Fig. 2:

The second-classes components include messages, the initial state, and human users. All these aspects reveal the complexity of systems, including smart cities, where messages reflect the numerous ways for the components to communicate, interact, coordinate, and cooperate. The initial state expresses that every system is time-variable, dynamic, and has different situations over time. Human users reflect that any kind of collaboration is involved with people to form an open societal-technical system, e.g., a smart city. Messages can be used to express all the details in collaboration, including cooperation, coordination, interaction, communication, and connections through interfaces.

E-CARGO helps us specify the connections between top-level components of a smart city in developing the IEEE standard. For example, a police system needs an environment including positions of different levels of police officers (roles), they have different rights (authorities) and responsibilities, and they have clarified relationships among them, e.g., report-to, request, and competition relations.

Thanks to the high-level abstraction, E-CARGO presents strong power to express components in complex systems. Through continuous efforts from different aspects, i.e., role transfer, reviewing role concepts, and the initial application in software development, a solid step-stone model for group role assignment (GRA) [3] was established. After GRA, more and more abstract problems are formalized and solved [1, 4, 5, 6, 7], and E-CARGO has been well verified. The research on RBC and E-CARGO has been developed to affect almost all the related aspects of complex systems, including agent evaluation, role negotiation, adaptive and dynamic collaboration [5], scheduling, and social simulations [6]. Using well-defined concepts in E-CARGO, many problems in building a smart city can be formalized in the form of optimization problems. Then, the problems can be solved with the support of new technologies, such as artificial intelligence, data mining, deep learning, and optimization platforms. For example, after a police system is approved the city (or state/provincial) government, the officers should be hired, GRA, GRA+, and GRA++ will help hire and assign people to appropriate positions from the whole view of the police system.

E-CARGO and RBC are a good fit for conducting standardization of smart cities. Such a standard for smart cities will help related stakeholders clarify the right technologies for establishing real smart cities and avoid political, economic, financial, or social losses in associated campaigns. Please note that according to E-CARGO and RBC, all the related new technologies to smart cities will be incorporated into a role engine, which manages and controls the running of the smart city (Fig. 1). We need to take action in applying E-CARGO and RBC to the IEEE Standards community. We have already established the IEEE SMC Standards Committee. The next step is to follow the RBC process shown in Fig. 1 to conduct standard development. That is to say, RBC is itself guidance for our standard development work and E-CARGO can help us clarify the significant components of smart cities.

This article was edited by Loi Lei Lai

To view all articles in this issue, please go to July 2022 eNewsletter. For a downloadable copy, please visit the IEEE Smart Cities Resource Center.

Dr. Haibin Zhu is a Full Professor and the Coordinator of the Computer Science Program, Founding Director of Collaborative Systems Laboratory, Nipissing University, Canada. He has published (and been accepted) over 220 research works including 30+ IEEE Transactions articles, six books, five book chapters, three journal issues, and four conference proceedings. He is a fellow of the International Institute of Cognitive Informatics and Cognitive Computing, a senior member of IEEE and ACM, and a full member of Sigma Xi. He is serving as member, Board of Governors, AVP Systems Science and Engineering, co-chair of the technical committee of Distributed Intelligent Systems, IEEE Systems, Man and Cybernetics (SMC) Society; Editor-in-Chief, IEEE SMC Magazine; and Associate Editor (AE) of IEEE Transactions on SMC: Systems, IEEE Transactions on Computational Social Systems, and IEEE Canada Review. He is the creator of the E-CARGO model and the proposer of the Role-Based Collaboration methodology. He has offered over 90 invited talks including keynote and plenary speeches on related topics internationally. He is the receipt of the meritorious service award from IEEE SMC Society (2018), the chancellor’s award for excellence in research (2011) and two research achievement awards from Nipissing University (2006, 2012), the IBM Eclipse Innovation Grant Awards (2004, 2005), the Best Paper Award from the 11th ISPE Int’l Conf. on Concurrent Engineering (ISPE/CE2004), Educator’s Fellowship of OOPSLA’03, a 2nd class National Award for Education Achievement (1997), and three 1st Class Ministerial Research Achievement Awards from China (1997, 1994, and 1991).