The smart cities vision entails the continuous collection of data and subsequent utilization of information that is communicated in every possible direction. Its implementation requires the extensive use of sensors, information and decision-making technologies. The development and deployment of smart city technologies will benefit several aspects of residents’ daily lives. Amongst them, security is a preeminent component that will only be enhanced in smart cities. A crucial component of the overall city security architecture is that of nuclear security, which refers to the detection, identification, and localization of nuclear materials that may be used in terrorist activities. This article explores the potency of data analytics as a means for implementing smart nuclear security within the vision of smart cities.

The terror attacks that took place in September of 2001 (known as 9/11) have made authorities revisit overall security architecture. Specifically, new security vulnerabilities were identified and the potential threats from those were fully examined [1]. One of the scenarios that was identified after 9/11 was the possibility of an attack using nuclear and radioactive materials [2]. This type of attack would have lethal consequences and its severity would be much higher than any other conventional attack. Detonation of a device containing nuclear material within a metropolitan area is an unwanted scenario, especially given that the material's dispersion would remain in the environment for a long time after the attack.
A significant line of defense against this type of terrorism includes the detection, identification, and localization of nuclear material before its use (explosion), known by the term nuclear security [3]. Up to this point, nuclear security utilized radiation measurement systems to analyze the obtained data, and identify patterns associated with nuclear material activities. Though radiation systems and their data analysis modules are widely used, they have several limitations that may be exploited by potential terrorists. For instance, radioactive material may be shielded (e.g., by lead) making their detection highly challenging.

Federated Learning is called "privacy by design." As TAI also considers privacy Smart city technologies provide new technologies for implementing smart nuclear security. In particular, smart city technologies may provide new signatures and observables that are associated with the storage, movement, and use of nuclear materials in nefarious activities [4]. Signatures refer to pieces of information that are uniquely associated with specific nuclear materials, while observables refer to the observed features of a signal that may lead to the identification of the signatures. 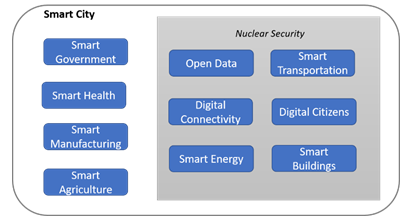 Figure 2: Smart city components and their relation to nuclear security.

Dynamic sensor networks: nuclear security will greatly benefit from the use of smart transportation infrastructure. Interconnected vehicles may consist of a line of defense against the movement of nuclear materials. In particular, vehicles may be equipped with radiation sensors that obtain consecutive measurements, which are transmitted through the data network and are processed to make inferences. Sensor instalment in vehicles is a very convenient choice given that it may create a sensor network with a dynamic architecture that has no specific form.

This dynamically varying architecture of the sensor network has the following benefits:

At this point, it should be noted that the vision of smart nuclear security encompasses all the vehicles within the city premises being part of the sensor network. However, in a realistic scenario, the network is mainly comprised of public transportation means since they move within the city limits for long periods of time during the day.

A smart building may also be part of the sensor networks. Sensors may be installed at key points and take radiation measurements at its entrance points and in the periphery of the building. Sensors in buildings may also be used together with the moving sensors from vehicles, thus creating a powerful network that covers the city’s whole area. With this type of network, illicit movement of nuclear material within the city will likely be picked up by at least one sensor: a terrorist carrying a nuclear device will certainly pass by a building or public transportation.

The electrical energy grid may also be considered to be a sensor network. Notably, the power grid may be seen as a ubiquitous network given that it may be found everywhere in cities. In other words, distribution lines and power grid components are found in almost every inch of a city, hence making the power grid a potential sensor network. The electromagnetic interferences caused by nuclear material close to distribution lines and other power grid equipment may provide new observables for the illegal movement of nuclear material.

In that case, detection and identification of electromagnetic interferences would be performed via advanced data analytics. Supervisory control and data acquisition (SCADA) and phase measurement unit (PMU) devices may also be used for collecting and analyzing data and making inferences related to illicit nuclear activities.

TIt is expected that one of the basic components of smart cities is the digital form of the citizens. In other words, the citizens will be able to connect to the city’s infrastructure through digital devices like smartphones and tablets and obtain useful information.

Here, we envision those citizens will also be able to provide information to the infrastructure for the purposes of nuclear security. For instance, citizens who notice suspicious behavior may report it to the city, and they may also report a peculiar observation (e.g., a citizen carrying lead bricks). In addition, advancements in nanotechnology may allow citizens to carry radiation detectors as part of their phones. To make it clear, the miniaturization of radiation sensors will allow their incorporation into smartphones. The ubiquitous presence of smartphones in cities accommodates full coverage of the city against nuclear threats.

In the above scenarios, data analytics would be used for:

In this article, a vision for implementing smart nuclear security in the context of smart cities is given. The extensive use of data analytics is essential in the realization of this vision. Smart city components may provide opportunities for obtaining new signatures and observables via the use of data analytics by analyzing multidimensional information vectors. The challenge in this vision is to exploit every piece of information coming from the various and uncorrelated data sources within the city to contribute to the detection of illegal nuclear activities.

This article was edited by Qi Lai.

To view all articles in this issue, please go to January 2023 eNewsletter. For a downloadable copy, please visit the IEEE Smart Cities Resource Center.

Miltiadis "Miltos" Alamaniotis is an assistant professor in the Dept. of Electrical and Computer Engineering at University of Texas at San Antonio. Prior to joining UTSA, he worked as research assistant professor at Purdue University. He received his Diploma in Electrical and Computer Engineering from the University of Thessaly, Greece in 2005, and MS and Ph.D. in Nuclear Engineering emphasizing on Applied Artificial Intelligence from Purdue University in 2010 and 2012 respectively. His interdisciplinary research focuses on the development of intelligent systems and machine learning approaches applied to intelligent energy systems, smart cities, and to nuclear security for the detection of hidden radioactive materials. He has published two hundred research papers in scientific journals, books, and international conference proceedings. He has been invited to serve as a guest editor in the International journal on Artificial Intelligence Tools, and as a Program Chair at the IEEE International Tools with Artificial Intelligence 2018. He had worked as an external researcher with the National Argonne Laboratory from 2010 to 2012, and as visiting researcher in the Energy and Power Systems group at Oak Ridge National Laboratory in May 2016. He was the recipient of the Distinguished Alumni Award of ECE Department of University of Thessaly in July 2017, and of the UTSA President’s Distinguished Achievement Award for Research Achievement in 2022.